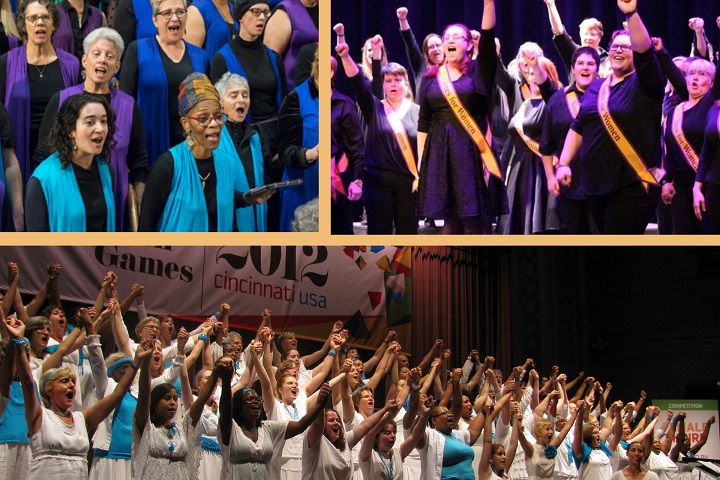 What differences do you see in composing for women’s voices as opposed to mixed and/or men’s voices?
With women, I can voice chords as closely as I want to and never worry about the sound becoming “muddy.”  (That’s a constant challenge when composing for men’s choirs!)  The biggest challenge for me when writing for women’s choirs (or men’s choirs) is making sure there’s enough registral and textural variety.  Keeping the sound from becoming too homogenous takes both creativity and restraint

Does the fact that you are writing for women’s voices have any particular bearing on your choice of text?
Oh yes!  As a “soundsmith,” my choices about texts are always affected by the basic sound quality of the voice types.  But it’s more complex than that.   When I write for women’s choirs, I find I’m powerfully influenced by a wide variety of extra-musical notions I have about women themselves.  If that last statement doesn’t sound very objective, that’s because it’s not!  These extra-musical notions are very personal, formed through the 48 years I’ve been on the earth.  They’ve been influenced by every woman I’ve ever known – my mother and grandmothers, my sister, my 11th grade history teacher, my college friends, my musical colleagues, my neighbor across the street…the list goes on and on!  So when I imagine playful women, fierce women, earnest women, or joyful women, a whole host of impressions rises up in my mind that are different from what I imagine playful teenagers, fierce men, earnest children or joyful families to be…

There are thousands of choral pieces out there which call for justice or peace or change (including quite a few by me).  In most of them, we composers allow the music’s beauty to seduce the singers and audience into a sense of well-being and joy.  I’m not saying that’s a bad thing to do.  As human beings we need  the healing and spirit-lifting qualities of music to inspire us, to bring us joy and hope.  But I didn’t want to write that kind of “hopeful piece” about slavery.  I really wanted the piece to be fierce and uncompromising, to indict not just “the other” but instead “the all” — including the singers themselves.  Having women deliver this message is very powerful to me, because I have seen many women transform situations through determination, compassion and honesty.  While there’s a good chance that I’ll eventually make a mixed choir arrangement of “Reasons,” I really wanted women to get a crack at it first.  I didn’t let myself flinch when I wrote it, and the singers can’t flinch either, not even a little bit.  Ah:  it’s a piece for “flinchless women”!

Which of your pieces for women’s voices have received the most performances (as far as you know), and why do you think that is?
My most performed piece, hands down, is a little 3-minute Latin jazz song entitled “If You Can Walk You Can Dance.”  The SSA arrangement of that song has sold better than any piece I’ve ever written for women’s choir.  Why does it sell so well?  The piece is light-hearted from start to finish, with some finger-snapping, suave modulations, and impromptu talking.   It’s not too difficult to learn and sing, and there’s plenty of repetition.  The song lends itself well to choreography and intergenerational choir performances.  It’s the polar opposite of “Reasons for the Perpetuation of Slavery”!  Even so, for all its simplicity, I believe that unabashedly upbeat songs such as “If You Can Walk You Can Dance” fill an important need for people.  Joy is a big part of what music is about.

What differences, if any, do you see in writing for women’s voices as opposed to children’s voices?
The timbre and strength of children’s voices is completely different from women’s voices.  Children’s choirs have an even more homogenous sound than women’s choirs, and not nearly as much weight, or bite.  I don’t know any way to get a truly intense, sustained chord out of a children’s choir, so if I want a sense of intensity, I have to get it in a different way – perhaps through rhythm, or through the use of an incisive unison vocal line.  Children’s choirs offer a wonderfully light and nimble sound that women’s choir can’t always pull off, but if I’m going for chocolate-cake richness, I’ve got to have women.

Has your writing for women’s voices changed in any way over the years you have been composing for this voicing?
Oh yes, the closer I am to being a “tough old broad,” the more fun I have with the voices of my fellow women.  When I was composing my first treble choir pieces, I’m not sure I was confident enough yet to have fun!  I trust women to be able to deal with any subject, and to bring their whole ever-lovin’ selves to the music in a way that few men’s or mixed choirs can.  If I want to throw in a sappy or sassy aside, I know that women’s choirs will dig into it.  I feel like I can offer any text to a women’s choir, and they’ll say “lemme at it!”  In general, their sense of community is very strong, and this creates an environment in which they aren’t afraid of looking foolish onstage, and generally don’t mind taking risks!  I’ve written 17 pieces for women’s choir to date, and I still feel like there’s a lot more I can write for this amazing ensemble.