What if Creating Art really was like Giving Birth? 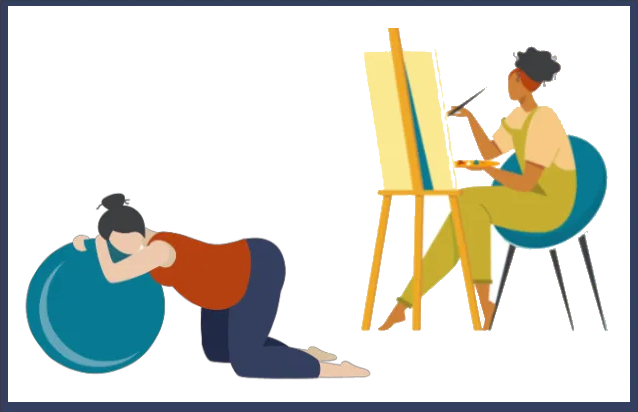 Having done both multiple times, I’ve done a some thinking about what creating art would be like if that were really true. Here’s a little glimpse:

Not that the artist’s job would be finished at that point. Heavens no!  Every day the artist would be called upon to provide art supplies — more supplies than she ever thought necessary for a single work of art. This would take an immense amount of time and energy, and each night she would collapse onto her bed, wondering where the next day’s supplies would come from.

The artist would not be permitted to observe the creation of the work of art, although certain signs of progress would be evident: distant piano reverberations, empty tubes of paint, the soft scratch of pencil against paper. Furthermore, no matter how strongly she wished to shape the artwork’s form, style or content, she would have no control over the finished product.  Once she realized and accepted this fact, she must be content with providing the best supplies that she could buy, beg, borrow or steal.

As the world premiere grew closer and closer, the physical demands on the artist would become overwhelming. Rush orders for obscure supplies would arrive unexpectedly — frequently in the middle of the night.

As with a new work of art, the premiere would be most dramatic! However, the exact date would be kept secret from the artist, and she would unveil the art by performing a monumentally exhausting physical task, like carrying a piano over a mountain or reshelving the Boston Public Library’s fiction section.

The critics would immediately come out with nothing but praise, showering plaudits on both art and artist.  However, as the years passed much of the credit for the art’s strengths would go to the art itself, while blame for the art’s flaws would frequently be assigned to the artist. As the artwork’s beauty and complexity deepened with age, the artist’s all-consuming act of creation would seldom be recalled, even by the artist herself. The art would truly have a life of its own.

An artist can create many many works of art in her life, but fortunately there’s a limit to how many times she can give birth.  I’ve cherished every aspect of being a parent, from the single act that set new life in motion to the last wave as the possession-packed car pulls away from the curb.

That said, if creating a work of art were really like giving birth, like really really, I don’t think I would be an artist. At the very least I would not be nearly so prolific.