On Not Finding My Voice 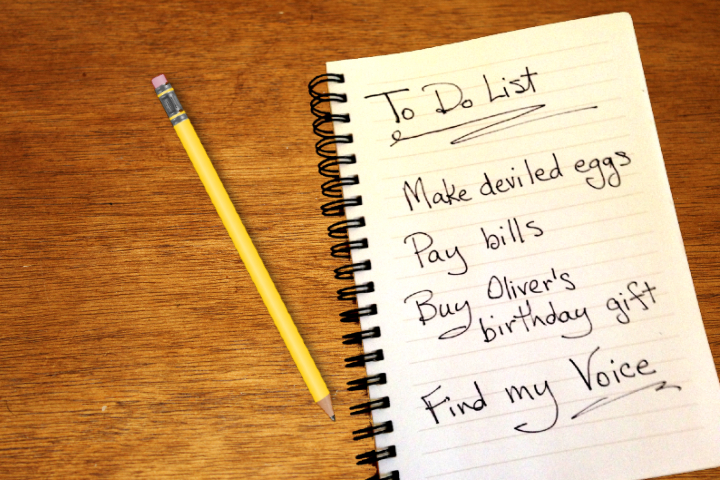 You know what I’m talking about. Voice. A composer’s personal musical style, her particular and often idiosyncratic signature, that all-important talisman which sets her apart from the 17.5 million other composers in the world. (Schubert’s sublime melodies, Prokofieff’s slippery modulations, Copland’s bright Americana…)

For composers, “finding one’s voice” is a sort of holy grail, except that you’re not supposed to go looking for it. Instead, you’re supposed to dive into a bottomless well of angst, cogitation, self-deprecation and transcendence, until someday you write a seminal work, and — voila! – your Voice will be revealed. Critics, scholars and audiences will notice this right away, and they will either love your music very much or hate it immensely, but either way, like the Velveteen Rabbit, you will finally be real.

I didn’t always fret about finding my Voice. I began composing as a kid by goofing around at the piano, and I was pretty much pleased with my efforts all the way through high school. At college I analyzed and reveled in the masterworks of Western music and learned the tools of the trade – intervals, counterpoint, modulation, development. Although it wasn’t in the formal curriculum, I also learned how important Voice was. Without it, a composer was all washed up.

Off to graduate school I went and somehow earned my terminal degree in music composition without ever finding my Voice. I knew I hadn’t found it yet because I knew all about Moses and the Burning Bush, which is how revelation happens. There would be a moment of blazing glory and all would be revealed! But as I stumbled around in a post-graduate haze, it became clearer and clearer to me why my Voice was refusing to be found: I liked the wrong kind of music.

To be sure, many of my composer colleagues were also professing to liking the “wrong kind of music,” often referring to seriously genre-defying forces like Ornette Coleman or Frank Zappa. This made my colleagues sound anti-establishment and savvy (which they were), while nevertheless implying that they had musical standards (which they did).

But when I say that I liked the wrong kind of music, I mean majorly uncool music. For starters, I have a soft spot for American musicals, from the sublime (A Little Night Music, The Last Five Years) to the kinda corny (Guys and Dolls, Pajama Game). Then there were the religious songs I was raised on and which still nourish me, and I’m not just talking Bach’s B Minor Mass. I’m talking This Little Light of Mine at full throttle, especially the “Hide it under a bushel? NO!” verse.

This may not sound like an earth-shattering problem to you. In fact, it does not sound like an earth-shattering problem to me, at least not anymore. Once the princess has kissed the frog and he has turned into a prince, we naturally exclaim, “Of course, how obvious: she had only to love him!” But we never see that at the time, especially with everyone around us saying “Ooh gross, a slimy frog!” – only in my case it was The Itsy-Bitsy Spider.

Many strange and wonderful things happened on my way to definitively Not Finding My Voice, including giving birth to actual live children (whose voices always sounded beautiful), and posting signs on my walls saying things like “Posterity is Overrated.” I came to terms with liking many uncool kinds of music. I decided I didn’t want to make any kind of Either/Or Voice Choice, so I didn’t. I got busy doing the work of being a composer, publisher, mom and wife, and I eventually forgot I was supposed to be finding something. I like to think my lofty, elusive Voice felt ignored, so it tucked its tail between its legs and found a new home in someone else’s doghouse. (Whew!)

So here I am these days, unrepentently composing in many different voices, and all of them sounding pretty much like the authentic me. (Whatever that is.) A sample of the past 18 months includes: