Stick THAT in your Choral Song 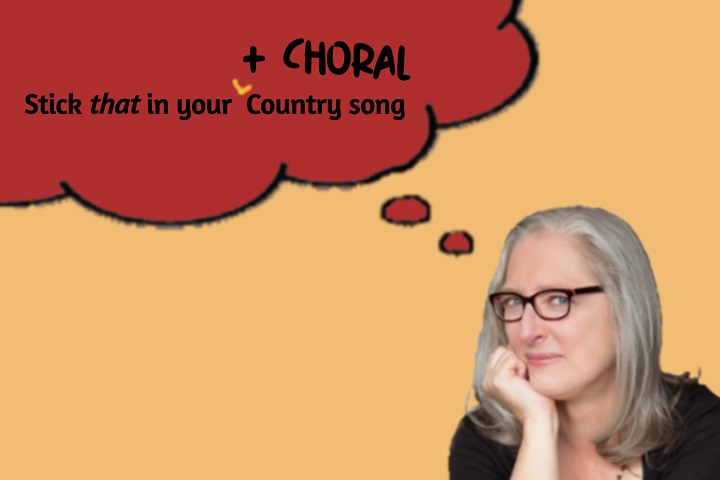 Anyone who’s listened to a country music station for more than two seconds in the past ten days has heard my newsletter’s “title track.” Eric Church’s latest song, “Stick THAT in your Country Songs” challenges country music to get real. I don’t know whether you’ll still be hearing it next year or the year after that, but if that happens it would be a good thing.

I was maybe ten years old the first time I was walloped by a song lyric. My family was driving the West Virginia turnpike, an improbably steep and winding two-lane highway that was literally carved and blasted through the mountains. When 16 Tons came on the radio, my father had to explain an incomprehensible line to me: “I owe my soul to the company store.” Whoa, I thought. Someone had stuck that in a song?!

From that moment, I was hooked. I already loved songs about equality, respect and justice — and I would grow up to write many such songs. But nothing made my heart pound like a song that called out inequality, disrespect and injustice.

It didn’t matter what the musical genre was. What mattered was the bitterness in Hammerstein’s line “You’ve got to be carefully taught.” Or the relentless tension of Schoenberg’s mind-blowing A Survivor from Warsaw. I listened to Strange Fruit many times, its images creating a devastating landscape that was unfamiliar and yet somehow known. Twenty-five years later I would do the same thing with Joel Thompson’s visionary cantata, The Seven Last Words of the Unarmed.

Although the songs mentioned above are well known, their emotional disquiet is far from the norm in their genres. Music that leans hard into grim realities can be a real tough sell. Whether it’s a radio playlist or a concert program, the guiding principles are often joy, love, hope and healing.

The glaring exception to this general rule is of course hip hop, where the exact opposite is true. No one would ever say “Stick that in a Hip Hop song” because the real and raw stuff is already stuck in. Heck, it’s actually baked in.

I’ve been thinking a lot about how these opposite emotions seem to occupy separate musical territories. It’s a kind of self-imposed segregation not of race but of emotional expression. There are invisible barriers about what feelings are allowed to be expressed through music, and how. Yeah sure, people of color are welcome in concert halls, but somehow frustration, rage and protest are often left off the guest list.

I’m thinking in particular here about choruses that sing from notated music, who are not only the primary performers of my music but also my dearest friends and colleagues. These ensembles give their hearts and souls to creating meaningful experiences for communities, students, worshipers, celebrators and mourners  Many singers count choir as the high point of their week, the magic that gets them through their every week. Given all this, it’s understandable that conductors are reluctant to select repertoire that expresses anger or asks indignant questions.

And where would they find a wide selection of such sheet music? Conductors who program music that calls out injustice have to beat the bushes to find published repertoire.

I don’t like to admit it, but I’ve had my own part in contributing to the overall geniality of classically-conceived choral music. The titles of my top-selling choral pieces include the words “dance,” ”faith,” “angels,” “light” and “love.” Move down the sales chart and the words “cares,” “doubt” and “tempests” start appearing. And bringing up the rear are my fiercest, feistiest, most heated pieces, those with words like “fighting,” “fist” and “slavery” in their titles, those which so often result in unforgettable performances and transformative conversations. It can take years or even a decade for those songs to gain traction, and I have no expectation that they’ll ever pay as many electric bills as my “light-filled” output.

How have I responded to this reality? Too often I’ve set aside a courageous first draft in favor of something with more widespread appeal and thus larger sales numbers. Whenever I’ve done that, I’ve not only let myself down but I’ve added to the very imbalance of emotional expression that I’m disquieted by.

With all this in mind, and with a heart both heavy and light, I wonder what “that” I need to stick in my songs, right now?