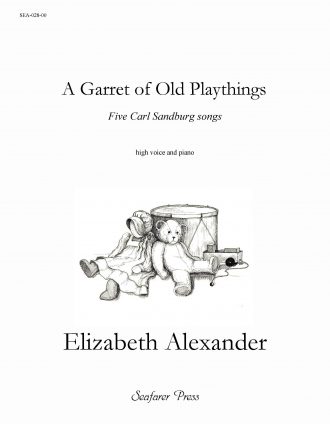 A Garret of Old Playthings

Halfway through my sophomore year in college I started skipping music theory class. It wasn’t that I disliked music theory – in fact I LOVE music theory! – but many classes were devoted to reviewing material I already knew and I was bored. Cutting class wouldn’t have been a big deal at a large university, but The College of Wooster had a small, engaged, teaching-focused music department. After a few weeks my theory professor had a little chat about my absences with composition professor Jack Gallagher, and together they came up with a special proposal for me. I would be officially exempted from attending certain “review-oriented” classes if I would write a series of theory-based composition exercises.

This was, of course, “an offer I couldn’t refuse,” which was perfectly fine with me because I didn’t want to refuse. Those modest exercises eventually became A Garret of Old Playthings. I wrote them for my friend Janet Youngdahl, who brought her pure     soprano voice and wide-open heart to the songs’ premiere.

By the end of the school year I was attending all the music theory classes again – we were studying 20th-century theory by then and I didn’t want to miss a single beat! – and I had decided to declare a major in music composition. All in all, I’d say it was a pretty good bargain.

A Garret of Old Playthings

II. God is No Gentleman

God gets up in the morning
and says, “Another day?”
God goes to work every day at regular hours.
God is no gentleman, for God puts
on overalls and gets dirty
running the universe we know
about and several other universes
nobody knows about but Him.

Changing light winds
blew over the sea,
came blue, came gold,
came silver with spray,
came white in dreamsnow
with long foam feathers,
long sleepy snowfalls,
then gray over the flats
an overcast of monotone —
night and stars a while
then night and no stars.