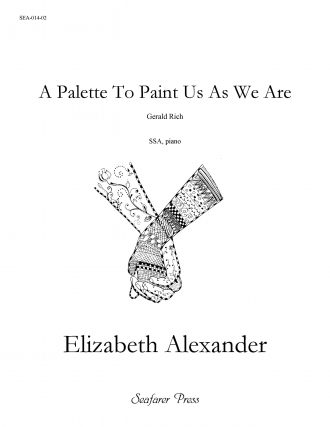 A Palette To Paint Us As We Are

A moving tribute to our skins’ true colors

Inspired by Gerald Rich’s moving tribute to our skins’ true colors — including such luscious shades as mahogany, coffee, champagne and rose gold — this piece weaves together a wide variety of choral textures and instrumental timbres, moving softly and tenderly from one hue to another, creating a seamless tapestry of sound.

“I saw this number performed at IMEA [Illinois Music Educators Association]. You have inspired more people than you will ever know. People of all colors were there and some had tears rolling down their face. I was so moved.” Susan Moninger, Director of Choral Ensembles, Elmhurst College; Co-founder and Director of Showchoir Camps of America, Inc. (Elmhurst, IL)

“A Palette To Paint Us As We Are was an audience favorite at both of our concerts this past spring. We are very fortunate to live in South Florida, where we meet many singers from a variety of world cultures. This text beautifully reflects not only our singers, but also the community we serve.” Eric Peterson, Media Specialist, The Girl Choir of South Florida (Ft. Lauderdale, FL)

“What a thoughtfully conceived musical interpretation of this poem. The tension in the chords gives way to such hope and fully illuminates the difficulty and promise in seeing each as we are. Thank you for this piece.” Margaret Countryman, Alto (St. Paul, MN)

“I am grateful for your innovative composition and the artistic setting of such a powerful text. THANK YOU!” Carlyn Zimmermann, Music Director, Carbondale Community High School Chamber Singers (Carbondale, IL)

I first heard Gerald Rich’s moving tribute to our skins’ true colors in the late 1990s, at a poetry reading where he read from his work. As the opening words of this poem were spoken, the room grew suddenly still except for a few barely audible gasps. As I took in each delicious shade of color, I envisioned a musical language that would contain as much harmonic and melodic color as the poem, moving softly and tenderly from one subtle hue to another. What I did not imagine was that the very act of composing this song would change me myself, but that’s exactly what happened. Day after day I sat at the piano, attempting to reflect through sound how light reflects from one person’s body to another person’s eyes. And at some point I realized that a different lens had been made available to my own eyes, one that was more appreciative, less fearful, and full of delight.

I owe a debt of gratitude to friend and fellow composer Ann Silsbee, who upon seeing an early draft remarked that she was disappointed that I’d set the word “champagne” on a low note, pianissimo. “I hear it as a champagne toast,” she said. “A toast to our beautiful colors!” Ann was right, of course, and I immediately went home and reset the word on a gloriously bright chord.

Over the years A Palette To Paint Us As We Are has received many performances and enthusiastic reviews. Conductors have called it “inspiring,” “powerful,” and “moving,” but also “overly sentimental” and  “divisive.” One newspaper reviewer called the harmonic language “astringent.” And a white professor once called me on the phone to regretfully inform me that her theoretical analysis revealed that I had a subconscious cultural bias towards lighter skin. Among her most passionate arguments was that I had elevated the word “champagne” above all the others, proof that I believed lighter skin colors were superior to darker skin colors.

I don’t know whether this song is powerful or biased or sentimental or astringent, and I certainly don’t know whether a theoretical analysis of this song reveals anything about my unconscious bias, but I do know that people sure do seem to have strong opinions about this song. A whole diverse palette of them. And I know that composing this song made me an ever-so-slightly better person, which is what music is supposed to do.

A Palette To Paint Us As We Are

Give us a palette to paint us as we are.
Enough of black and white, yellow and red,
Those false colors that sham at fact.

These are the colors of people I see,
Not black and white, not yellow and red.
Those false colors no longer will do.
Give us a palette to paint us true.

Gerald Rich
© by Gerald Rich. Reprinted by permission of the poet.