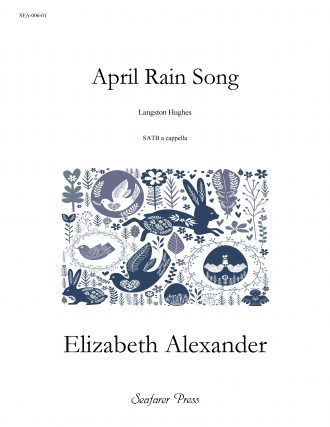 A richly-textured lullaby sung by the rain itself

April Rain Song is, in Langston Hughes’ words, a “sleep-song.” With an evocative vocal accompaniment crafted from the syllables of the word “lullaby,” this intimate song cradles listener in an experience of gentle, comforting rain.

I composed April Rain Song when my sons were still babies and I was singing lullabies to them several times a day. I made up most of the lullabies on the spot using whatever materials presented themselves at the moment. I listed their stuffed animals, I embroidered fantastic stories, and I invented new lyrics to familiar tunes. But my favorite lullabies were created by playing around with the syllables of their names. While in the rocking chair I would spin their names into long melismas. While pacing with a tired wailer I would repeat syllables until a rhythmic pattern gave me a groove to dance to. And when the inevitable boredom of day-in-and-day-out caregiving set in I would make up outlandish rhyming ditties.

I didn’t realize it at the time, but my setting of Langston Hughes’ “April Rain Song” was directly inspired by my children’s “name lullabies.” The complete text of the poem is sung by two or more soloists, while the choir itself creates a vocal accompaniment entirely from the syllables of the word “lullaby.” Starting out as a light rain, the vocal texture eventually gives way to an unhurried, gently rocking sleep-song.

The rain makes running pools in the gutter.
The rain plays a little sleep-song on our roof at night.

And I love the rain.