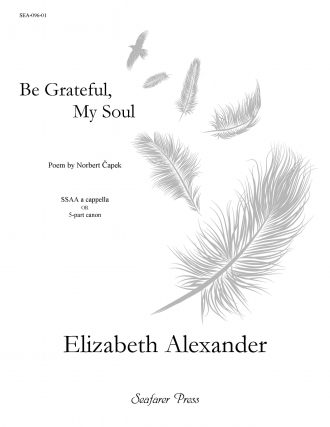 Be Grateful, My Soul

A passionate testament to life’s worth, even when facing adversity and oppression

In 1941 Unitarian minister Norbert Čapek was imprisoned by the Gestapo, tried for treason, and executed despite being found innocent. A poem from his final letter from prison, cast here as musical outpouring of gratitude and acceptance, is a passionate testament to life’s worth and beauty even when shrouded in darkness.

“A lovely haunting melody. I’m thrilled you captured the spirit of my grandfather so well.” Ron Fredrick, grandson of Norbert Čapek

“I love the format for this score. It’s just a beautifully put together publication, and all the information I’m looking for is in here. I wish more composers and publishers would dedicate space in the publication for the background and context of the text!” Marion Dolan, Artistic Director, The Choir Project (Naples, FL)

On March 28, 1941 Norbert Čapek, minister of the Unitarian Church in Prague, was arrested by the Gestapo, along with his daughter Zora. In addition to being accused of listening to foreign broadcasts, several of Norbert Čapek’s sermons led him to be singled out for “high treason.” Zora was sent to a forced labor camp, from which she was subsequently released. Although Norbert was found innocent of the treason charge, the Gestapo ignored the court’s recommendation, sending him first to Dachau and later to Hartheim Castle in Alkoven, Austria. There he was executed in a gas chamber along with 300 other clergy over the course of the war.

Zora’s last visit to her father was on March 31, 1942 in Dresden, the day before his trial. During that visit, he gave her a letter containing a poem he wrote for her. The prayerful stanzas from the core of that poem were adapted to create the lyric of Be Grateful, My Soul.

Poem in a letter written from Hartheim Castle, March 31, 1942

© by Ron Frederick. Reprinted by permission