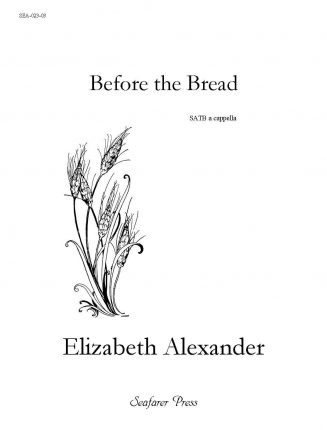 A gracious canon setting of a traditional English blessing

A gracious canonic setting of a traditional English blessing celebrating the cycle of planting, growth and harvest. With an arching melody suggesting the limitless bounty of the world, this simple song ushers gratitude and thanksgiving into formal and informal celebrations alike.

When setting a pre-existing lyric to music, I typically refrain from changing, omitting or “modernizing” words. So you can imagine my dismay when I discovered that I had accidentally substituted the word “bread” for the word “flour” when setting the following folk blessing:

I found myself strongly resisting the correction, for I had become thoroughly attached to the sound of the word “bread.” Could I leave the mistaken word unchanged, I wondered, since this was after all a folk blessing?

I decided to delve deeper, and soon discovered that I was just one in a long line of liberty-takers! My first searches yielded these three-line versions:

Before the flour the mill,
Before the grain the earth and rain,
The beauty of God’s will.

Furthermore, subsequent searches revealed that I was also not the only person to use the word “bread.” Interestingly, these versions contained alternate names for God as well:

Before the bread is the snowy flour,
Before the flour, the mill,
Before the mill, the field of wheat, the rain,
And the Father’s will.

So much for discovering the “original version” of this blessing! Emboldened by these various folk variations, I left my own inadvertent bread/flour word substitution unchanged.

No matter what words speak most strongly to you, I invite you to try to sing and engage with the words I chose to set, keeping in mind the universal sentiment behind this blessing.

A special note about the phrase “God’s will”:

For those of you who wince at the oft-abused phrase, “God’s will,” I’d like to share my memory of a story I heard many years ago, which was told by Rev. Max Coots in a sermon entitled, “The Rabbit, the Radish Bag, and God’s Will.” His story went something like this:

Max was walking through the woods with a friend when they spotted a dead rabbit by the path. They inspected it briefly and then walked on. Later on the same path they spotted a plastic bag that had formerly held radishes, probably discarded by a thoughtless hiker. They thought little of these discoveries until they took the same walk on subsequent days. They noticed the radish bag each time, but the rabbit’s body gradually decomposed and disappeared altogether.

Max realized that the natural order of things was what God intended – for living beings to reach the end of their days and then be folded back into the cycle of life. On the other hand, he was not at all sure that the manmade plastic radish bag was working within this natural order. In this one tiny way, Max actually knew the will of God. Not an arrogantly manufactured “will of God” like “God wants us to win this war” or “God wanted this child to recover from cancer.” But a true and humble glimpse of the cosmic mind, a small rare certainty in a mostly uncertain world.