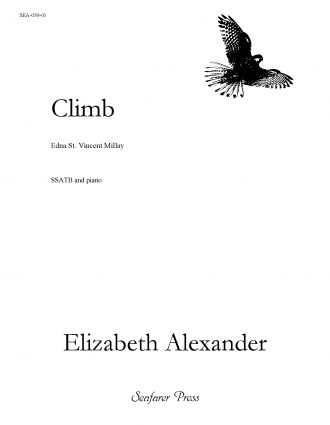 A rapturous call to freedom and risk

In Edna St. Vincent Millay’s poem, “On Thought in Harness,” a falcon’s timidness reflects our own reluctance to embrace freedom and risk. Contemplative solos, soaring vocal lines, and a lustrous piano part create an atmosphere of thoughtful expectation which gradually ascends into extravagant flight.

“Climb represents the struggle to let go of that which we hold most dear, in an effort to encourage further growth and discovery.” Cedarburg News (Cedarburg, WI)

“Climb took me on a musical journey, from the somewhat dissonant beginning…through the ascending lines powerfully urging the falcon to climb into the stratosphere. The last notes of the piano do not even resolve (which would bring the feeling of the piece back down to earth); rather, the falcon is allowed to continue climbing beyond the bounds of the song.” Brett Hanisko, singer, Cedarburg High School Choir

“Thank you for giving the altos so many great notes! I felt (and my fellow altos agreed) that during some measures, our notes really made the chord.” Katie Hamblin, Alto, Cedarburg High School Choir

“I absolutely loved singing my part, the tenor part; it was an awesome part that gave us an excellent chance to showcase our section.” Mike Dixon, tenor, Cedarburg High School Choir

When Darciann Ketter commissioned Climb for her high school choir to sing at graduation, she involved the singers in a big way. Shortly after we signed the commissioning contract I received an enormous envelope containing letters from every chorus member describing their values, hopes and fears. They also sent copies of their favorite poems.

I was blown away by the vulnerability and courage in those letters. My own sons were in middle school, and I couldn’t help imagining where their own dreams might lead them. When that time came, their job would be to leave and my job would be to let go. I hoped I would be good at it.

The fear of leaving and letting go is all over Edna St. Vincent Millay’s poem “On Thought in Harness.” At first Millay seems to fault the falcon for its own timidity, but then lets it slip that this reticence might be traced to none other than the speaker herself: “me, that quake at the thunder.”

With this in mind I began the song with solitary, introspective solos, full of longing and disappointment. The narrator’s brave inner voice is ushered in by the chorus, which eventually reveals the truth about the ground-bound bird: The falcon will be free to depart when her human is ready to let her go.

When the time came for my own sons to leave home, I ended up being pretty good at letting go. I had some help in the matter because when I wasn’t good at it, my sons didn’t hesitate to remind me what my job was. And as it turns out, they’ve ended up being damned good fliers.

On Thought In Harness

My falcon to my wrist
Returns
From no high air.
I sent her toward the sun that burns
Above the mist;
But she has not been there.

Her talons are not cold; her beak
Is closed upon no wonder;
Her head stinks of its hood, her feathers reek
Of me, that quake at the thunder.

Degraded bird, I give you back your eyes forever, ascend now whither you are tossed;
Forsake this wrist, forsake this rhyme;
Soar, eat ether, see what has never been seen; depart, be lost,
But climb.