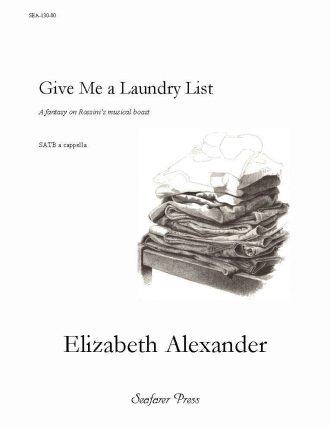 Give Me a Laundry List (and I'll set it to music)

A lighthearted spin on a boast by composer Giaocchino Rossini

The inspiration for this lighthearted romp is a boast made by prolific composer Giaocchino Rossini: “Give me a laundry list and I’ll set it to music.” Get ready for an over-the-top laundry list, some “hold onto your hat” modulations, a few sly barbershop voicings, and a classic “Rossini crescendo”!

Unlike most of us mortal composers who can easily labor over a single measure for hours, Giaocchino Rossini was famous for composing with confidence and speed. Legend has it that some of his overtures were composed the night before they were premiered.

Creating a musical setting of Rossini’s clever (if arrogant) boast was a delightful and irresistible challenge for me. Along the way, I threw in my own “laundry list” of not only lyrics but also music, for after the introduction’s classical counterpoint the song abandons all pretense of stylistic consistency. As an additional homage to the compositional shortcuts of prolific composers, my “laundry canon” builds up using a gradual additive technique that musicologists call a “Rossini crescendo.”

“Give me a laundry list and I’ll set it to music.”

A shirt, a skirt, a girdle and a turtleneck,
A frock, a smock, a bonnet and a cotton sock,
A tartan, a parka, a cardigan, a caftan, and a cap,
Knickers and trousers, sweaters and jumpers,
Diapers and boxers and bloomers,
A pajama, a pashmina, balaclava, bandana, bikini,
A dashiki, a dupatta, a kimono, muumuu, tutu –
A cap and a sock and a shirt and a smock,
And diapers and diapers and diapers,
Diapers divisi doloroso!