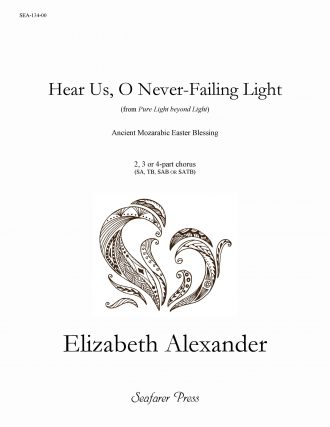 An evocative musical setting of the Easter Eve Prayer of the Mozarabic Christians, who flourished on the Iberian Peninsula in the 8th-11th century. Images of fire, light and illumination are woven throughout this song of devotion and awe.

This flexibly-voiced edition contains three completely different arrangements of this song. Depending on the specific voicing of your choir, you may sing this song in 2, 3 or 4 parts, for treble, bass or mixed chorus.

Hear Us, O Never-Failing Light is the the first movement of the three-movement work, Pure Light Beyond Light.

About the text: In the 8th century the Iberian Peninsula came under Islamic rule, causing many Christians and Jews to migrate north. Among those who remained were the Mozarabic Christians, who flourished around Toledo and Córdoba. Over the next three centuries, this coexistence would lead to a dynamic blending of cultures. Many Mozarabs and Muslims intermarried, observed each other’s holidays, translated and studied each other’s sacred books, and in some cases even shared houses of worship.

Over time, the Mozarabs developed their own distinct prayers, chants and liturgy. The blessing of the Paschal candle on Easter Eve was a Mozarabic ritual not practiced by Roman Catholics, one whose rich imagery suggests a culture all its own.

The Iberian Peninsula’s comfortable distance from Rome kept the Vatican’s powerful arm at bay until the 11th century, when Pope Gregory VII set out to destroy what he called “The Toledo Heresy.” Papal forces drove the Muslims out of the region and abolished all Mozarabic practices, replacing them with those of Rome. Today the Mozarabic rite is still celebrated by a handful of devotees, including a Mozarabic brotherhood in Toledo and a Poor Claire community in Madrid.

Hear us, O never-failing Light,
May our souls be lamps of Thine,
Kindled and illumined by Thee.
May they shine and burn with truth,
And never go out in ashes.
May we be Thy dwelling,
Shining from Thee, shining in Thee.
May we shine and fail not;
May we ever worship Thee.
May we shine forth inwardly
And the light of perpetual faith abide in us.