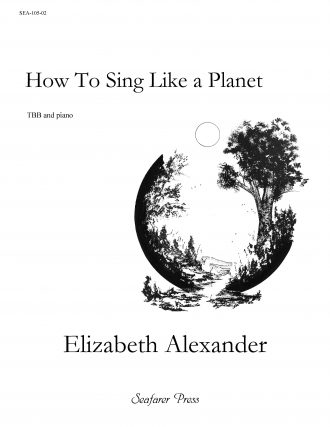 This musical “instruction manual” is as whimsical as the singing planet which inspired it. A genre-defying showpiece evoking both the ethereal and the “grooving”, How To Sing Like a Planet offers up equal portions of wisdom, humor, humility and common sense. A prominent and colorful piano part undergirds this sparkling romp.

“In my constant search for repertoire a title sometimes catches my attention and I can’t pass up perusing it. I am always pleased when my initial excitement bears fruit with a work that is equally captivating. How to Sing Like a Planet is full of surprises. The B section will make you smile at such heavenly bodies… It is an excellent piece of choral music, and we are happy to award it this week’s Silver Platter Award.” Jack Senzig, editor of the Choralnet Series “Composition Spotlight”

“When I first saw the piece, I’m afraid I was a little too close-minded and disregarded it as strange for the sake of being strange and overly contemporary. However, after rehearsing it and listening to it for the last few weeks, I have come to realize that this is one of the most creative and exciting pieces I have ever had the pleasure of performing. The text painting and wordplay is wonderful and it has really been a joy to work on it.” Colin Vega, Tenor in 2016 New Jersey High School All-State Choir under direction of Rollo Dilworth

How To Sing Like a Planet was inspired by a news article by the same title, written by gregarious San Francisco Chronicle columnist Mark Morford. Using a recent science report as a springboard, Morford spun out a delicious riff about the irrepressible music that the earth makes just by being itself. His glorious, over-the-top phrases described “…all sorts of curious tonal phrases that bounce around the mountains and spin over the oceans and penetrate the tectonic plates and gurgle in the magma and careen off the clouds and smack into trees and bounce off your ribcage and spin over the surface of the planet in strange circular loops.” Wow, I thought. Could we sing that kind of music?

While I didn’t actually set Morford’s words to music, his unfettered imagination (and provocative title) got me off and running. I decided to write a little “instruction manual” for how one might sing like a planet. I called on my son Oliver to help brainstorm, both because he had studied earth science more recently than I and because of his own irrepressible creativity. Oliver helped me remember principles like harmonic motion and oscillation, phenomena like the earth’s wobble, and the primacy of the four basic planetary forces — gravity, electricity, weak force and strong force. I also borrowed some ideas from my yoga teacher Paul Busch, whose radical notions include the conviction that gravity is our friend, and the suggestion that wobbling is nothing to be embarrassed about.

“Scientists now say the planet itself is generating a…kind of music, huge, swirling loops of sound, a song so strange you can’t really fathom it, so low it can’t be heard by human ears.” Mark Morford, from “How To Sing Like a Planet,” San Francisco Chronicle

Let everything unfold in its own time.
Accept what’s beyond your control.
Revel in simple harmonic motion.
Turn. Rotate.

Get charged up.
Be weak. Be strong.
Don’t fight friction.
Vibrate sympathetically.
Don’t be afraid to get into a groove.

Let gravity have its way with you.
Revolve around something luminous.

Bloom periodically.
Hunker down when you must.
Wobble from time to time without apology.

Know that annihilation’s possible any time,
But expect a bright tomorrow’s coming anyway.