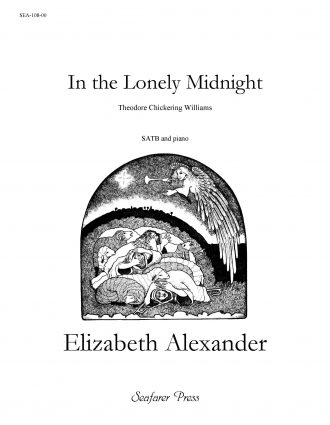 In the Lonely Midnight

A Christmas carol bearing both mourning and hope, with a lyric written on the eve of World War I

First published in 1914 on the eve of World War I, Theodore Chickering Williams’ lyric “In the Lonely Midnight” has been sung to the Victorian hymn tunes “Lonely Midnight” and “Lyndhurst” as well as to the plainsong “Adore te Devote.” This modern anthem setting brings grace and poignancy to Williams’ heartbreakingly tender words, making space for their despair, resilience and joy.

In seeking what is relevant about ancient religious celebrations I most often look to writers of my own time, but Theodore Chickering Williams’ lyric “In the Lonely Midnight” resonated strongly with me. First published in 1914 on the eve of World War I, the profound anguish and hope poured into his timeless verses feels as relevant as if they were written now.

At the time of first publication, Williams was severely weakened by pneumonia and facing what would be his last Christmas. Although he did not live to see the end of the war, his poem offers a promise that love will triumph in the end.

Over the years, “In the Lonely Midnight” has been sung to the Victorian hymn tunes “Lonely Midnight” and “Lyndhurst” as well as to the plainsong “Adore te Devote.” It is my hope that my own setting adds a worthwhile new dimension to Williams’ longing for the world to be ruled not by pride and scorn, but by love.

In the Lonely Midnight

In the lonely midnight on the wintry hill,
Shepherds heard the angels singing, “Peace, good will.”
Listen, O ye weary, to the angels’ song,
Unto you the tidings of great joy belong.

Though in David’s city angels sing no more,
Love makes angel music on earth’s darkest shore;
Though no heavenly glory meet your wondering eyes,
Love can make your dwelling bright as paradise.

Though the Child of Mary, sent from heaven on high,
In His manger cradle may no longer lie,
Love is King forever, though the proud world scorn;
If ye truly seek Him, Christ your King is born.