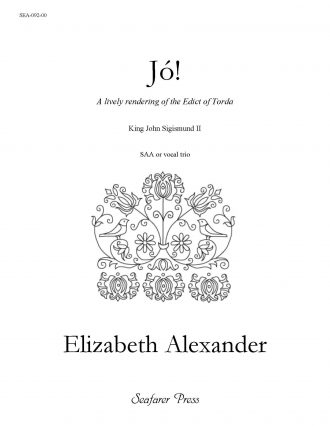 In response to the religious intolerance and violence that plagued16th-century Europe, King John Sigismund III of Transylvania issued a formal decree granting unprecedented freedom of religion to his country’s people. Imagine a group of village women spreading this glad news, quoting from the document now known as the Edict of Torda. With lyrics in the original ancient Hungarian dialect and vocal writing inspired by Eastern European folk music, “Jó!” (meaning “it’s all good!”) carries a joyful message of tolerance that is still as relevant as ever.

I conceived Jó! as an imagined moment in Transylvania centuries ago. It is 1568, and a group of women have just heard about the Edict of Torda, which promises to keep their country safe from the violence and religious persecution plaguing the rest of Europe. They cannot wait to tell everyone in their village the good news!

“Jó” is an all-purpose good feeling Hungarian word, like “okay,” “alright,” or “hunky-dory” — a reassuring word that is actually used in the Edict of Torda. In this lively song, sung in an ancient Hungarian dialect and crafted in the style of Eastern European folk music, “jó” serves as both a refrain and an exclamation of harmony and goodwill.

Historical Context: By the mid-16th century, some of the Counter-Reformation’s violence was on the wane in Europe; Germany’s Thirty Years War had ended and England’s newly-crowned Queen Elizabeth eschewed the religious violence of her predecessors. Nevertheless, the Inquisition was in full force in Spain; Catholic adherents and Protestant Huguenauts were waging an all-out war in France; and Unitarian philosopher Michael Servetus was burned at the stake in Switzerland.

Meanwhile in Transylvania, Queen Isabella issued a decree in 1557 granting unprecedented religious freedom to Catholics, Lutherans, Calvinists and Unitarians. Eleven years later Unitarian minister Francis David persuaded her son King John Sigismund III to issue an even more forceful decree, The Act of Religious Tolerance and Freedom of Conscience, commonly referred to as The Edict of Torda. In addition to the freedoms already conferred by his mother, Sigismund’s decree extended further religious freedom to those four denominations, and added lesser but significant protection for Jews, Muslims and Eastern Orthodox Catholics.

Excerpt from The Edict of Torda, issued by King John Sigismund II of Hungary in 1568

Preachers shall propagate the Gospel in all places, according to their own understanding,
and if the community is willing to accept, that’s all well and good.

If not, no one is allowed to press them to adopt it in spite of their not being reassured in their heart;
but they may keep a preacher whose teachings they like.

And therefore no one may persecute them for this;
no one is to be denounced or disparaged at on account of religion.

For faith is the gift of God, which comes from listening — listening to the words of God.