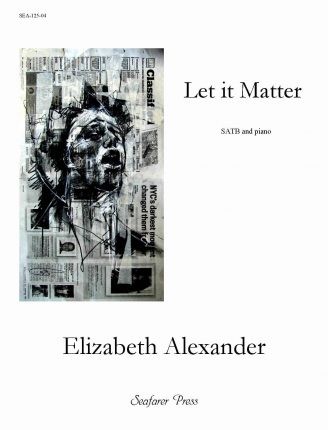 An urgent call to deep listening across cultural and class divides

Let It Matter is an urgent call to deep listening across cultural divides, crafted with grit, tenacity and passion. Its pithy, emotionally layered lyrics are punctuated with edgy internal rhymes and surprising juxtapositions, eschewing the comfortable and predictable at every turn. In its final, luminous measures, this song offers listeners a profound, open-ended challenge: “No one would ever call this easy listening. Listen anyway.”

“This is one of the most powerful pieces I have ever had the honor of performing, and I know many other Amasong members share the sentiment. Thank you so much.” Jessica Nichols, Singer, Amasong

“Let It Matter greatly touched me in our current world. It seems ever more important every single day to listen to each others’ stories… Thank you so much again for your beautiful music, sharing it with the world, your boundless energy and your palpable joy.” Serra Vickery, Singer, VocalPoint

As much as I want to be open to new information, I don’t always find it easy to adjust my world view. A decade ago I realized I had an inner resistance to accepting that racism was so very deeply entrenched in law enforcement departments. I had never experienced police brutality myself, so it was tempting to imagine it a rare occurrence – yet evidence increasingly showed that was not the case. This resistance concerned me greatly. I clearly had some work to do.

Part of that work included being brutally honest about how hard it can be to admit that your preconceptions are wrong — that “every story has a flip side.” With this in mind I dove into composing what would eventually become Let It Matter.

As I worked on the song I often thought of Circle of Peace, a neighborhood group comprised of youth, parents, grandparents, police officers and community members that has met at my church for dinner every week for over a decade. The agenda of these meetings is simple: To listen to and to speak personal stories, experiences and concerns in order to create a safer, more compassionate, and more just world. It is an act of courage to simultaneously hold your own story and someone else’s story without dismissing either one. But that is exactly what the members of Circle of Peace endeavor to do.

I hope Let it Matter reflects in some way the dedication, pain, grit and hope that keep that circle going week after week. And that perhaps the act of writing this song brought me a few steps closer to “opening up the prison of my mind.”

You’ve got your own story –
You and everybody else have got a bone story,
Sunrise certain and touchstone true.
A homegrown story that you’ve known
ever since you could say the words for
“us” and “them” and “you.”

But every story’s got a flip side –
Underneath the surface there’s a rip tide
Powerful and yet denied.
To know the story of a stranger:
That can be a mighty re-arranger –
Let it be a downright game changer.

Let that story in. Let it matter.
Let it open up the prison of your mind.
There’s so much pain and glory in everybody’s story —
Let it matter. Let it in.

Let it lead to honest conversation.
Let it shape the things you say and do.
Let it be the bridge that heals a nation.
No matter what you’ve been through,
Your own point of view
Is just a little part of what is true.
Don’t be afraid to let that story in.

Let that story in. Let it matter.
Let it open up the prison of your mind.
There’s so much pain and glory in everybody’s story —
Let it matter. Let it in.

It’s about the fears that lead to fences.
It’s about the dreams that fall apart.
It’s about what builds up our defenses.
You’ve got to open your heart,
Your most tender part.
You’ll find yourself alone until you start
To let that story in.

Let that story in. Let it matter.
Let it open up the prison of your mind.
There’s so much pain and glory in everybody’s story —
Let it matter. Let it in.
No one would ever call this “easy listening.”