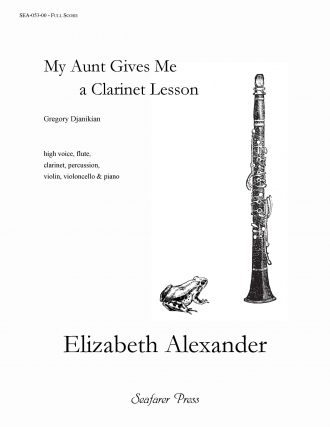 My Aunt Gives Me a Clarinet Lesson

An over-the-top musical fantasy for all ages

My Aunt Gives Me a Clarinet Lesson has everything in it except the kitchen sink, which is appropriate not only because Gregory Djanikian’s whimsical poem cries out for a wild assortment of lecturing, howling, arpeggiating, drumming and oompah-ing, but also because the clarinet lesson itself actually takes place in a kitchen. This spirited musical fantasy is a delight for all audiences: multigenerational audiences, classical music lovers, new music aficionados, and concert novices alike.

This 12-minute work calls for strong and independent musicians on all parts, and is usually best performed with a conductor. Performers should order two full scores (one for the conductor and one for the soprano), plus one set of instrumental parts.

My Aunt Gives Me a Clarinet Lesson has everything in it – including the kitchen sink! That’s because not only does Gregory Djanikian’s whimsical poem cry out for a wild assortment of lecturing, howling, arpeggiating, drumming, and oompah-ing, but the lesson actually takes place in a kitchen.

I started out by brainstorming a whole menagerie of snippets and scraps of music, which was such a lark that my family kept interrupting me to ask why I was having so much fun. By the time I finished weaving together these stream-of-consciousness sound bites I was hopelessly in love with this fanciful child who just can’t find a way to get his imagination to come out the right end of his horn.

My Aunt Gives Me a Clarinet Lesson

“Play,” my aunt said, “pianissimo.”
I blew out toots and squeaks, filled the kitchen
With caterwauls, monkeys, pigs,
There was a menagerie, there were jungles.
“Why not the cello,” she said, “why not drums.”
“Zookeeper,” my uncle said, “game warden.”

I blew out ostriches, catbirds, snow geese.
“Silly boy,” she said, creasing
The pages of the lesson book
“Take the gum out of your mouth,
Don’t blow so hard.”

There were frogs at my feet,
Boat-tailed grackles perched on the towel rack.

I could hear my cousins playing Ping-Pong in the cellar,
There was the tick tick of the oven baking bread,
And wasn’t that Freddy Petrie outside
Under the maple, swinging easily on a rope
And making the branch creak?

How many metronomes there were!
“Begin again,” my aunt said, “restrain,”
And snapped her fingers next to my ear.
Two mules, I counted. Three cows.

Where was Benny Goodman? Dixieland?
Which house were all the saints marching in?
Farewell, Carnegie Hall, I thought. Good-bye,
Pierson Elementary School Band. So long,
Janice Reutlinger who played the tuba.

There was a yak lowing in the doorway.
“Domesticate,” my aunt said, “refine.”
Freddy Petrie was riding a wild donkey
Along the blackberry bushes, waving and smiling.
The maple was becoming dangerous and colorful.
Hippopotami had come.
Soon there’d be phalaropes, merinos.

“Sonority!” my aunt cried out. “Sonority!”
And ducks. There were lots of ducks.