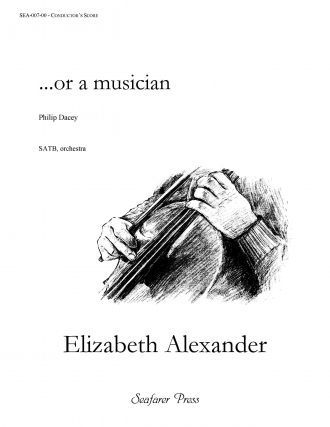 This mercurial musing on music’s mysterious source draws its literary inspiration from a spirited poem by Philip Dacey, in which the sacred and secular merge into one powerful creative force. A rollicking 10-minute montage of musical styles ranging from Bach to barbershop, both lighthearted and ultimately transcendent.

“The music illustrated both music’s wonderful variety and expressiveness and the interrelation of sacred and secular. Old favorites in a new setting prompted joyful laughs from the audience.”  Wisconsin State Journal

“This collage offers opportunities to smile, especially in its treatment of Philip Dacey’s poem ‘The Musician,’ which combines sacred and secular elements in a lighthearted but serious way. The audience…gave the composer sustained applause at the conclusion of this eight-minute work.” Jess Anderson, The Isthmus

In the great nave of the church,
we eat noodles and throw dice,
while at lunch in the café
a man sinks to his knees,
muttering prayers
and touching the floor with his head.

A minister delivers a sermon
that sounds suspiciously like a recipe
for coq au vin,
while someone else has hung
beautiful laundry out to dry
on the wide-open arms of a cross.

We’re confused
but happy to be so,
unclear as to whether
that was God who just walked by
or a musician
on her way to a concert,
the whole next world
squeezed into her black case.

© by Philip Dacey. Reprinted by permission of the poet.