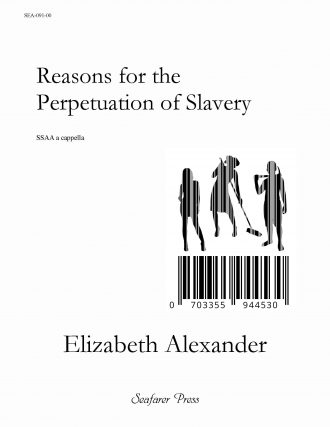 Reasons for the Perpetuation of Slavery

A clear-eyed compelling look at human slavery through the ages, including the present time

A fierce and urgent look at the pervasive institution of human slavery in all times, including our own. This dramatic work spins out the temptations and rationalizations that serve to justify every level of this grim supply chain, from “owners and bosses” to “eager consumers.” An unforgettable concert experience, and a rare opportunity for a choir to engage with a challenging social issue.

Note: The first movement, The Sheer Possibility in the First Place may be performed separately as a standalone piece.

“The highlight of the first half was Elizabeth Alexander’s Reasons for the Perpetuation of Slavery. Not only was the chorus completely invested in the music’s meaning, difficult rhythm and counterpoint, it was navigated with complete confidence and polish. The work is brilliantly innovative; the chorus is asked to stomp on the ground, evoking marching in chains, and the ensuing overlapping of the phrasing gives the impression of immense frustration and chaos.” Anthony Aibel for New York Concert Review, Inc., on Distinguished Concerts International Concert at Avery Fisher Hall, March 1, 2012

“We performed Reasons for the Perpetuation of Slavery at our concert last Saturday, and it was EXTREMELY well received. In fact, there were about 10 seconds of silence after we finished before the applause began. It’s such a powerful piece of music, and so well written. The way you set the text makes it very easy for the singers to bring out the words and the importance of them.” Jessica Corbin, Artistic Director, Bella Voce Singers (Brooklyn, NY)

“45 women, coming from the back and sides, all with those accents on 1 and 4…. We had 900+ people in attendance, and you could have heard a pin drop as the women entered. I can say it was the most powerful way we’ve ever started a VocalPoint concert. The women loved what you did with the words and how you set them. Thank you for the music, for that message…. it was a piece we will not forget.” Jennifer Anderson, Artistic Director, VocalPoint (St. Paul, MN)

“I must admit, I was very intimidated by the piece. I was responsible for conducting it in our…concert as well as guiding the girls through the learning process, and it pushed everyone to sharpen their skills. Once we all finally just committed ourselves to bringing musical life to the piece (on many different levels), we were hooked. It’s a wonderful work. It has propelled all of us to a different place both musically and in our perception of the world around us. In a good way — the piece is haunting.” Wendee Wolf-Schlarf, Music Director of Vocal Majority of Traverse City Central High School (Traverse City, MI)

My interest in slavery as an economic and cultural institution began with my desire to understand a dark chapter in United States history, but inevitably it led far beyond that. I started by contemplating slavery’s first seed – how and why humans came up with the idea of controlling other humans – and from there I learned everything I could about how and why it continues today. I looked at the rationalizations and justifications people devise for slavery’s many guises. Eventually my explorations led me to write Reasons for the Perpetuation of Slavery, which looks at our active and passive participation in a system inherently dependent on human exploitation.

Fortunately, conductor Phillip Swan and his Lawrence University choir Cantala gave the piece an unforgetable premiere in 2010, as well as an early opportunity to have meaningful conversations about it. This helped me understand that there was nothing wrong with what I had written! The choral world was simply not ready for this song yet. But with each passing year society has grown increasingly willing to look at the grim face of modern slavery. More and more choruses perform this song each year, as singers are eager to use their voices in a new way, inviting the tragedy and complexity of our modern-day world right up onstage.

Reasons for the Perpetuation of Slavery

I. The Sheer Possibility in the First Place

The allure of order. The desire to acquire.
Classes of people. People of class.
The gain of capital. Capital gains.
The persistent perception of greener grass.

The justification of pride.
The pride of ownership.
The ownership of justice.

The tidiness of titles. The convenience of caste.
Distributions of wealth. A wealth of distributions.

The desire for a fix. The fixation on race.
The race towards civilization. The civilization of desire.

Chains of command. The commands of corruption.
The corruption of language. The language of chains.

The existence of endless prepositional possibilities:

As a short-term solution, in the interest of progress,
’Til my head’s above the water, ’til my feet are on the ground,
For the good of the nation, for the company, for my family,
Despite a few misgivings at the present time,
Behind closed doors, by hook or crook,
Beyond our borders, as a very last resort,
Between you and me, beyond my control,
On the cheap, on the sly, with my back against the wall,
Out of sight, out of mind, out of my hands,
Under the radar, under the gun, under the table, around the law,
In for a penny, in for a pound, in for a lifetime —
Just this once.

Longings for chocolate, palaces, pyramids,
Flowers in the winter, rubber and rum.
What people will do for a little black dress,
A hand with the children, a carpet, a kiss,
An immaculate house, an unexamined life.

Looms of fingers. Fields of hands.
Chests of organs. Pounds of flesh.
Platters of thighs. Legions of legs.
Rivers of blood. Heavings of hearts.
Batteries of arms and backs and shoulders.

People of means. The means to an end.
Unheeded rumors. Eager consumers.