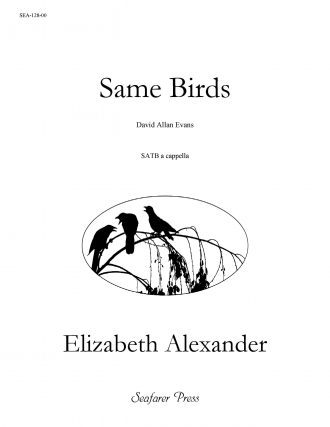 A sassy frolic about deep listening, the cry of existence, and a congregation of rowdy birds

Same Birds is a gaggle of glee, sizzling with quirky jazz voicings, snappy syncopations, and musical mischief. Its unabashed word play and exaggerated dipthongs grow ever more rambunctious until they culminate into the glorious, full-bodied pronouncement: “We are here.” The song concludes with an ethereal coda in which birdcalls are layered over the simple mandate: “Listen.”

I first stumbled across David Allan Evans’ “Waking Up” while casting about for a poem to set to music. My initial impressions were embarrassingly pedantic:

These attributes were both pluses in my mind, so with no further thought I tossed the poem onto my “short list.”

A few days later I headed off to a restaurant with the “short list” on my smartphone, thinking that I would make my final choice while savoring some pasta. Upon a second reading, “Waking Up” became a whole different poem. It flew right off the page!

This poem was not just about a flock of yammering crows! This was a full-on affirmation of existence, in all its beautiful, messy glory. My musical setting would be over-the-top and packed with attitude. I heard an unrestrained, off-kilter blues idiom cawing with dissonance. Singers would revel in the glorious diphthong of the word “same,” its repetitions teetering on the edge of interminable while at the same time hinting at something eternal and ethereal. I started writing down the opening material on the only piece of paper I had: my teeny tiny restaurant receipt.

Composing Same Birds was a hoot. A lark. An existential whoop. The whole process made me feel more compassionate and affectionate towards people. Yes, we may be mundane, idiosyncratic or downright annoying at times, but by golly we’re showing up day after day and saying: “We are here. We are here.”

I learned several things during the writing of this composition, which I share with you here:

1. From my friend Abbie I learned that there’s actually a word for a squawking affirmation of existence – a “yawp.” Walt Whitman used the word in “Song of Myself”: “I sound my barbaric yawp over the roofs of the world.”

2. From the online Urban Dictionary I learned that “yop” has made its way into American vernacular. It is defined there as “the supreme syllable of primal self-affirmation.”

3. From squinting at my teeny tiny handwriting on my restaurant receipt, I learned to never go to a restaurant with a creative project in mind without bringing a notebook along.

outside our window. I can’t
name them, wouldn’t need to

if I could, but only guess
what they seem to be

saying over and over.
Listen: We are here,