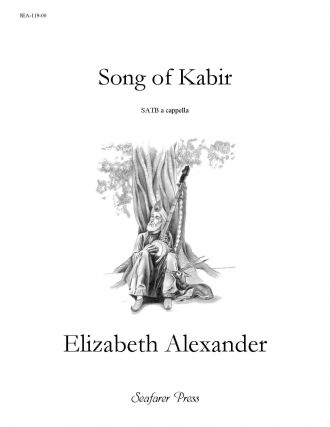 A luminous song of wholehearted devotion

A fluid, luminous setting of a beloved prayer by Kabir, offering praise to a God both universal and intimate, both of and beyond this world.

About the poet: The Indian poet Kabir (1440-1518) grew up amidst Hinduism and Islam, and was deeply influenced by both. He had little use for the rites and trappings of any religion, and openly despised the pious quoting of scriptures from any religion. His poetry invoked the divine using both Hindu and Muslim names – “Allah” and “Brahma” – but in all cases Kabir engaged with the divine in a way that was deep and immediate. Today Kabir is revered by Hindus, Muslims and Sikhs alike, and his songs are loved by people of all faiths.

“Love this piece! Thank you!! The Crown of the Continent Choir is an independent community choir of 60-70 voices specializing in inspirational and upbeat choral music of the world. Our repertoire, drawing from many traditions, is selected to offer a musical soundscape representative of our love for one another and for this beautiful earth in which we live.” Craig N. Hodges, Music Director, Crown of the Continent Choir (Kalispell, MT)

Most of my music has been commissioned for specific occasions or performers, so I don’t always have complete control over a given piece’s theme, length, difficulty, mood or style. These artistic “nudges” have often resulted in my growth as a composer, prompting me to get out of my comfort zone and write music that I would not have imagined otherwise.

But some pieces were written simply because I was inspired, growing out of exactly where I was at the moment I conceived them. Song of Kabir is one of those pieces. Once I heard how the opening measures could breathe and flow, I simply couldn’t wait for an interested commissioning party to come along. I fell headlong into Kabir’s universal and intimate vision of divine presence, both of and beyond this world.

About the text and translation: Rabindranath Tagore translated many of Kabir’s songs into English, introducing them to a worldwide audience. His 1915 rendering of this poem reflects the writing style of Tagore’s culture and time: “The creature is in Brahma, and Brahma is in the creature: they are ever distinct, yet ever united. He Himself is the tree, the seed, and the germ. He Himself is the flower, the fruit, and the shade…”

The lyric used in this musical setting is adapted from Tagore’s version, in a modern rendering which reflects the universality of Kabir’s deity, as well as the less florid language of our time.