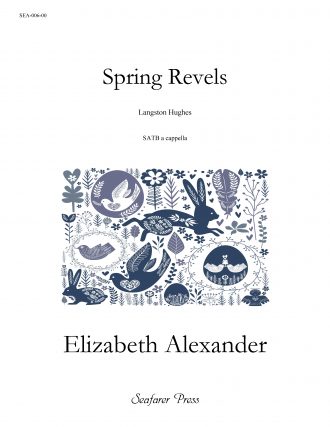 Three evocative songs full of the gentleness and unpredictability of spring. The words of Langston Hughes, e. e. cummings and Carl Sandburg are spun into music brimming with humor, imagination and a few fiddle-dee-dees.

The individual movements may also be performed as standalone songs:
I. April Rain Song
II. when faces called flowers float out of the ground
III. Spring Grass

Because April Rain Song is, in Langston Hughes’ words, a “sleep-song,” the word “lullaby” is used as a vocal accompaniment for the text. At first, this texture suggests a gentle rain; later the layered voices create a shifting, slumberous atmosphere.

In the second movement, I took my cue from e. e. cummings’ images of “floating”and “flying,” shaping melodies which sometimes hang in mid-air, and sometimes to soar. The whimsical phrase “the mountains are dancing” is sung first in unison, later as a duet, and finally as a four part canon.

Whenever my piano student Erica mastered a new song she would dance gleefully into my studio singing her favorite sound bite. So when I wrote Spring Grass I threw in some “doodahs” and “fiddle-dee-dees” just for her, skipping along just like her young feet. Unlike my sprightly earlier setting of this same poem for solo voice, this choral setting contains an earnest plea for the long-awaited grass.

The rain makes running pools in the gutter.
The rain plays a little sleep-song on our roof at night.

And I love the rain.

II. when faces called flowers float out of the ground

when faces called flowers float out of the ground
and breathing is wishing and wishing is having —
but keeping is downward and doubting and never
– it’s april (yes,april;my darling)it’s spring!
yes the pretty birds frolic as spry as can fly
yes the little fish gambol as glad as can be
(yes the mountains are dancing together)

when every leaf opens without any sound
and wishing is having and having is giving —
but keeping is doting and nothing and nonsense
– alive;we’re alive,dear:it’s(kiss me now)spring!
now the pretty birds hover so she and so he
now the little fish quiver so you and so i
(now the mountains are dancing,the mountains)

when more than was lost has been found has been found
and having is giving and giving is living —
but keeping is darkness and winter and cringing
– it’s spring(all our night becomes day)o, it’s spring!
all the pretty birds dive to the heart of the sky
all the little fish climb through the mind of the sea
(all the mountains are dancing;are dancing)

Smell of the young spring grass,
You’re a mascot riding on the wind horses.
You came to my nose and spiffed me.
This is your lucky year.

Young spring grass just after the winter,
Shoots of the big green whisper of the year,
Come up, if only for young feet.
Come up, young feet ask you.