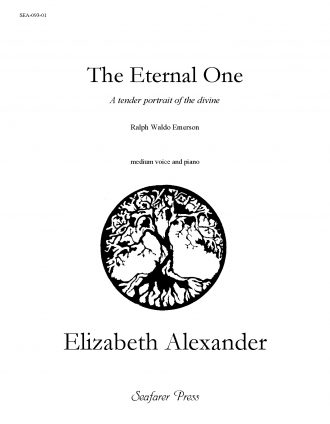 A tender portrait of the divine

Ralph Waldo Emerson’s seminal essay, “The Oversoul,” extols a supreme being endowed with infinite benevolence, beauty, omnipresence, and, above all, unity with all beings. The lyric of this warm and tender ballad is comprised of some of the most poetic images from this essay, creating a portrait of God that is both powerful and intimate.

I was initially wary about setting a Ralph Waldo Emerson text, not because he wasn’t a compelling thinker and writer but because his essays were so intense. As with many writers of the time, his sentences were long, winding and dense. Metaphor followed metaphor, leaving me gasping for air.

But I kept thinking I’d find just the right text if I looked hard enough! Emerson was so compelling! One of the few people in early America who was familiar with Buddhist and Sufi philosophies, he thought of God as neither patriarchal nor judgmental but instead, all-embracing and benevolent. This divine presence, which he called the “Over-soul,” flowed through the mind and spirit of every living being, not rigid but in constant flux.

When I finally came across a direct and approachable excerpt from Emerson’s essay “The Over-soul” I ecstatically set it to music. It was performed by a terrific baritone at a music conference and I thought all was well.

Alas, I discovered a few weeks later that the excerpt itself had been greatly adapted! I immediately began correcting altered words and phrases back to the original text, but there was one correction that I could not bring myself to make. In an attempt to render Emerson’s writing gender-neutral, the editors had changed all references to “man” and “his” to “us” and “our” — an intimate, first-person voice. Here, God was understood as a presence endowed with infinite benevolence, beauty, and unity with all beings. And I found that understanding to be breathtakingly beautiful.

Excerpt from The Oversoul