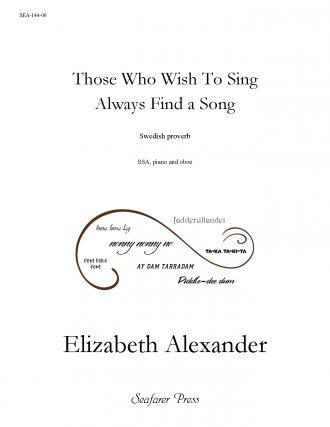 Those Who Wish To Sing Always Find a Song

This rhythmically engaging song, based on a Swedish proverb, features singing syllables from around the world. Included are such gems as “nonny nonny no,” “diddle-dee dum,” “fadderullandei,” “ay dam taradam,” “taka takita,” and “pom poko no pom.”

The oboe part is included in the choral score. The score also includes a link to a video about the background and pronunciations of the singing syllables.

Music is something each and every one of us invents from scratch, starting from the first moment we babble in our cradles. Our first vocal music comes unbidden, untaught, unthought. It simply springs forth. It’s as if we have an instinctive desire to participate in the ocean of sound waves that ping into and around our bodies every moment of our lives – and so we sing! What the Swedish proverb says is true:“Those who wish to sing always find a song.”

It was with these irrepressible vocalizations in mind that I decided to set that delicious proverb to music, along with various “meaningless” singing syllables from all around the world. Meaningless, that is, until someone gives voice to them from a deep inner place, a place that transcends all languages, opinions and philosophies.

For as yet another popular saying goes, “When words fail, music speaks.”

“Those who wish to sing always find a song.” – Swedish proverb