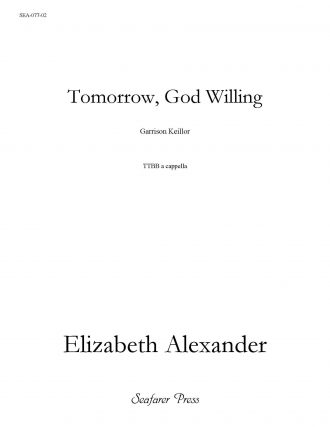 A buoyant riff on humility, gratitude and second chances

Singers get to revel in every aspect of this wise and pithy text, set to music here with warmth, earnestness, a nod to close harmony, and a whisper of prayer.

“I say without exaggeration that this is one of the most FUN pieces to sing I have encountered of the more than 200 pieces we have rehearsed and presented onstage. Tomorrow, God Willing is just a wonderful example of how compelling the contemporary composition scene is at this time. Thank you, Ms. Alexander.” Christopher Whitney, Singer in 2nd Tenorland, Cordus Mundi (New Hope, PA)

When Perfect Harmony Men’s Chorus asked me to write a new piece in honor of their 10th Anniversary, I gave some thought to the setbacks, successes, perseverance, joy and blind faith which had gotten their choir through its formative decade. This line of thinking led me to a rather unconventional text: the concluding words of one of Garrison Keillor’s Lake Wobegon radio monologues, which I had jotted down on a scrap of paper sometime in the 1990s. The paper itself was a bit worse for the wear, having spent many years magneted onto my refrigerator door, pinned onto my office corkboard, or taped onto my bathroom mirror:

We do the best we can.
We do the very best we can, and tomorrow, God willing,
we get to wake up and try again.

I have only a vague memory of the Lake Wobegon monologue itself. I do remember that the main character is unexpectedly presented with a challenging life situation, and he finds he has no idea how to respond. Looking back at the end of the day, he realizes he didn’t handle the situation with much grace. In fact, he flat-out bungled it. This is terribly distressing to him because he cares deeply about all the people involved. Weary and disheartened, he reminds himself that this same problem will still be here in the morning, and that (like it or not) he will undoubtedly be offered many more chances to figure out how to deal with it.

The characters in Keillor’s monologues have always been flawed, which is what makes them so real and beautiful. Failure and grace are intertwined, neither one able to exist without the other. Stubbornness, cluelessness, passion and pride leads his characters to do and say some of the stupidest, most self-defeating things I have ever encountered in modern fiction. Often bewildered by the small and large twists of life, they blunder through life as we all do, trying not to do too much damage along the way, and somehow able to do what has to be done day after day. Tucked into a corner here and there are glimpses of compassion, sometimes reflected in words but just as often in action, tenacity or forbearance.

Garrison Keillor’s personal failings and indiscretions are now a widely-known aspect of his life, something which made me reconsider the future of Tomorrow, God Willing. As someone whose own career is dependent on public image and reputation, I am keenly aware of the power of “guilt by association.” But the more I thought about this small, redemptive lyric, the more it seemed that this all-too-human, ever-hopeful song still had an important place in my catalog. Its modest twenty-five word lyric is still one of the truest things ever said: “We do the very best we can, and tomorrow, God willing, we get to wake up and try again.”

We do the best we can.
We do the very best we can,
and tomorrow, God willing, we get to wake up and try again.