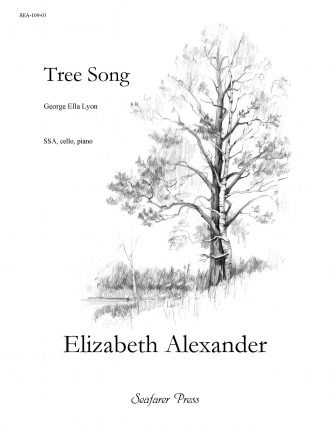 A deceptively simple but exquisitely wise song about giving, receiving and interdependence. At the center of it all are the cello and piano, two of the most graceful instruments ever crafted of wood.

In the choral version of Tree Song a whimsical list of trees forms a vocal counterpoint to George Ella Lyons’ poem, creating a sense of playfulness and delight.

After the first rehearsals of Tree Song, one of the singers shared her personal response with me, writing: “I’m
reading Susan Cain’s book, Quiet, on being an introvert in a world that prizes talkative, extroverted people, and your song
resonates with some of the topics in the book…like the benefit and power that different kinds of presence and
energy bring to the world.”

I am, myself, not very introverted — in fact, I have had to work hard to learn how to listen well. In order to do
this, I first had to learn to be more accepting of other people, of myself, and of the world as it is. In this regard,
trees provided an important model for me. As far as I can tell, trees do not waste any of their precious energy
straining against present circumstances, but instead accept their place in the scheme of things. They aren’t giving
themselves makeovers, fretting about their inadequacies, or calculating their rank in the tree hierarchy. They do
not move to New York City or the Pacific Northwest when they want more out of life — they just stay where they
are, going about the quiet business of being. Even when the old oak tree in my backyard is clearly stressed from
heat or wind or drought, it simply continues to “do its thing.” Some of its branches might die back, or its acorns
might drop prematurely, but it accepts the gifts of sunlight and rain just as it does during more favorable
conditions, singing its patient tree song all the while.

The story of the Buddha finding enlightenment in the shade of a bodhi (also referred to as a bo-tree), makes perfect
sense to me. George Ella Lyon’s simple and gracious poem “Tree Song” speaks to the beingness and the very heart
of the give-and-take world of trees, and I can well imagine that is what the Buddha found there in the shade.

When I first started to compose Tree Song, my initial vision was that the choir would represent the tree itself,
perhaps embodying its individual components: roots, trunk, branches, leaves. I imagined clever contrapuntal
motifs, weaving themselves together like an intricate root network or canopy. But as I worked with the material
more and more, I became less and less attracted to such a complex (and therefore compositionally impressive!)
song. Instead, I wanted to allow the choir to just be itself; that is, a corporal body of people noticing, listening and
learning from what trees do best: Live, Give, Receive, Be.

So, contrary to my original plan, Tree Song developed into an opportunity for the singers to participate in a simple
act of being This song is less about singing — and more about listening. I have to smile when I think of this: for
once, I have written a choral piece which is not about the singers’ fabulous voices, but instead about their capacity
to breath gently, in humility and quiet love.

This is why the cello and piano — arguably the most grand and graceful instruments ever created from wood —
are so central to Tree Song, engaging in a gentle dialogue with each other and the singers.

Roots, trunk,
branches, leaves.
As a tree gives
so it receives:
food from
the earth,
rain and sun
from the sky.
Its roots
reach deep
and its crown
rises high.
Blossoms
in spring,
fruit in
summer and fall:
home for many,
shelter for all.