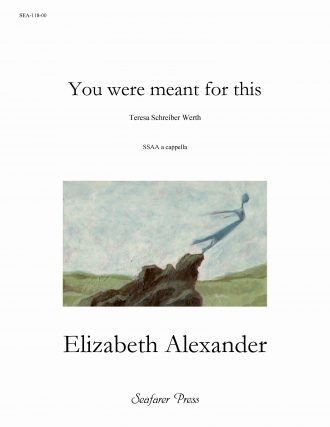 You were meant for this

A fierce and vibrant farewell to a dying friend

Teresa Schreiber Werth’s small poem, “Full Circle,” was written during a friend’s final days, ushering her into the next world with acceptance, vibrancy and love. This musical setting of Werth’s poem pulses with rhythm and breath, with canonic vocal lines suggesting the cycle of life. Taking its inspiration from the light described by those who have had near-death experiences, You were meant for this: concludes not on a somber note but instead with a bright outpouring of glorious, inevitable light.

“I was stunned when I heard it for the first time…the sheer power of it, the shimmering quality, the dramatic ending… When the song ended, Cathy’s arms were raised and she held them there for what seemed like forever. You could have heard a pin drop. I know I wasn’t breathing. It was an awesome, dramatic, shimmering moment. When she dropped her arms slowly then came thunderous applause. It truly was a moment I will never forget.” Teresa Schreiber Werth, poet

From the Beginning
When you were just a bit of stardust,
You were meant for this:
A gentle crossing over
Unafraid,
Leaving behind,
Nothing.
A body
Fully spent
Within a
Soul.
Complete
And ready now
To soar.